Tear Them All Down 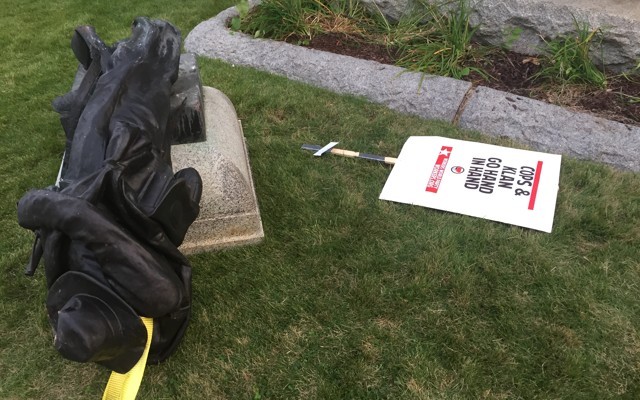 There are many people throughout the world’s and – more specifically – our nation’s history that have espoused twisted and perverse worldviews. Those people have adversely impacted the lives of many others and we as a nation should remember that. It should not be quickly forgotten how much evil can be wrought by few men with utopianistic visions of how the world should work. Men like Hitler, Stalin, Lenin and yes, even Confederates like Robert E. Lee. We as a nation need to be cautious about how we choose to remember men like them. Remembrance is not the same as commemoration. Monuments and statues of evil people of the past should not be built and I have no problem with them being torn down. Tear them all down.

There is a ridiculous argument being passed around the web by some prominent conservative brain trusts claiming that statues of these evil confederates should not be torn down because it “sanitizes history.” I’m sorry, but that is asinine. There is a clear, definable difference between reverently remembering our history and building a monument to our nation’s sins. Sanitizing History would be taking a torch to a museum, or whiting out undesirable sections in our history books. Knocking down statues of corrupt historical leaders is hardly “sanitizing history.” Statues of these men, wherever they are, solely lend credence to the empty thought and corrupt ideological views they espoused. They stand as an idol to the morally weak among us who would be inspired by their life stories. Tear them all down.

So, there is NO argument to be had about why these monuments are being be torn down, but there is one to be had about how. It would be productive to go about this like adults and approach the city or state in which the statue of issue is in place, with an argument about why it doesn’t belong there. Instead, we see mobs of adult-aged toddlers throwing temper tantrums, kicking and screaming in the streets – while they tear down monuments out of rage, rather than reason. This is polarizing and unproductive. We gain nothing from this as a society. The right sees it as a violent attack on history and the left sees it as fighting the racist patriarchy. There is no room for debate when we act like two year olds in a massive cultural sandbox.

Enough moral posturing from the right and enough unearned victim-hood from the left. Monuments of morally depraved figures from the past should not be put anywhere but museums. Tear them all down.